This is another one of the Buddhas in my home. The jolly Buddha is based on a Chinese Ch'an (Zen) monk named Hotei who lived over 1,000 years ago. Because of this monk's benevolent nature, he became known as an incarnation of the bodhisattva who will become Maitreya (the Future Buddha). His large protruding stomach and jolly smile have given him the common designation "Laughing Buddha."
Posted by owenandbenjamin at 8:50 PM 1 comment:

Email ThisBlogThis!Share to TwitterShare to FacebookShare to Pinterest
Labels: Buddha in my home, Buddhism

Posted by owenandbenjamin at 6:44 PM 2 comments:

Email ThisBlogThis!Share to TwitterShare to FacebookShare to Pinterest
Labels: Buddha in my home, Buddhism

From Nippon Cinema, here are two trailers for Takashi Miike's Thirteen Assassins, the 2010 remake of the original 1963 samurai film. Thirteen Assassins will be released in Japan in September.
The film stars Koji Yakusho as Shimada Shinzaemon, a samurai who gathers together a team of 13 skilled assassins to kill the younger brother of the Shogun, Matsudaira Naritsugi (Goro Inagaki). Naritsugi is innately cruel, and uses the power of the shogunate to commit mass atrocities against his own people. The assassins attempt to ambush Naritsugi as he makes his annual journey from Edo to his own domain. Unfortunately, he’s under the protection of a skilled military tactician named Kito Hanabee (Masachika Ichimura), and the assassins find themselves outnumbered four to one. Hanabee is a former colleague of Shinzaemon, and although he personally detests Naritsugi’s actions, his dedication to the samurai code of honor dictates that he must protect him at all costs. Nippon Cinema
This looks like a pretty good film based on the plot. I look forward to when this is released in the US. Unfortunately I have not seen the original since Netflix does not carry it. Damn you Netflix.

Posted by owenandbenjamin at 7:04 PM 2 comments:

I know there are a lot of other much higher quality photos out there of Tokyo Sky Tree but this was as close as I could get on my last trip. These photos are from the Kanto Bus on the Shuto expressway on the way to Narita. The zoom on the camera I was using was not working either. Oh well.
There has been much talk about the name of the new tower and I agree with most people in that I think the name is stupid. A tree in the sky? I don't know. Tokyo Sky Tree is already the tallest structure in Japan and it is only a little over half done. I've seen the progress from the same bus on my last three trips to Japan going back to last year. Pretty impressive looking tower. 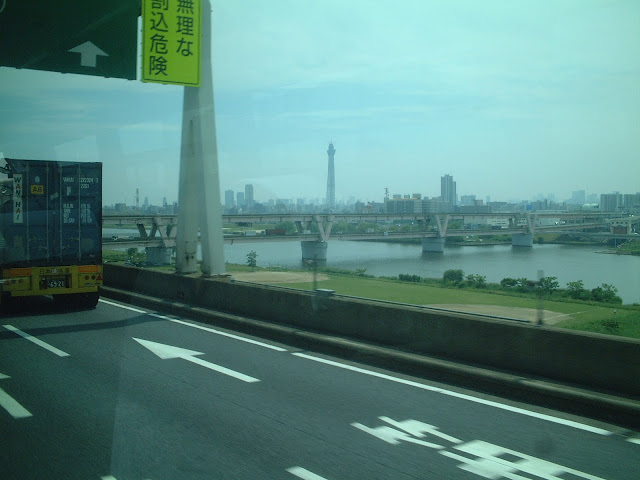 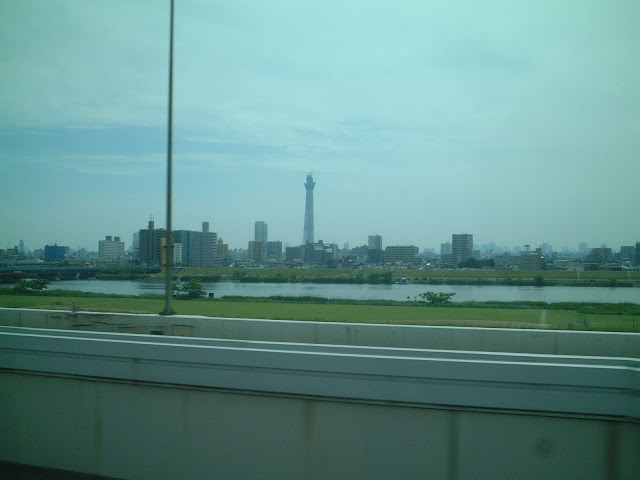 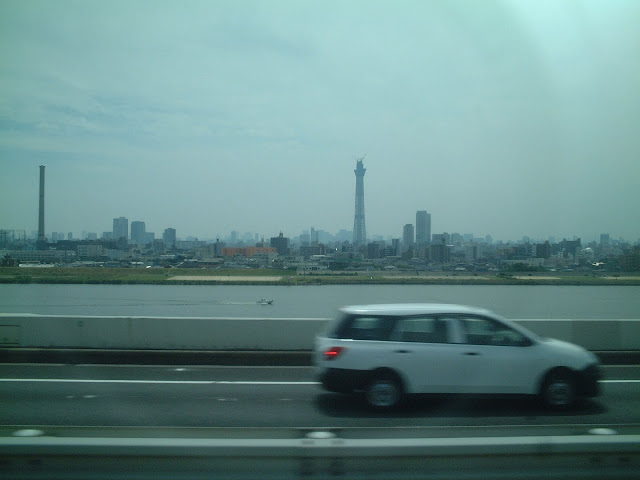 Posted by owenandbenjamin at 6:36 PM 6 comments:

The House Where Evil Dwells

Moving into a new house can be frightening. Moving into this one is deadly. Edward Albert (Mimic2), Susan George (Straw Dogs) and Doug McClure (Maverick) star in this horrifying haunted-house tale about a young American family moving into an old Japanese house where the dead don't rest...and history is about to repeat itself. A century ago, a samurai brutally murdered his adulterous wife and her lover before taking his own life. Now, the Fletcher family has found what they think is their perfect Japanese home - not knowing it's the same house where the murders occurred. But as strange events escalate and the ghosts of the dead toy with the living, the Fletcher's discover they've become unwitting players in a horrible reenactment...one which they may not survive! (88 minutes, 1982)

This was a surprisingly good film for a 70s style B movie with an awesome ending, and I mean awesome. The movie begins set in the mid 19th century with a samurai who discovers his wife cheating with another man. The husband flies into a rage and slaughters them before committing seppuku. This all took place in the small house that later in the 20th century would be rented to the American family. And that's when all the crazy stuff begins. The family starts experiencing more and more odd events in the home including giant crabs that terrorize the daughter. For some reason all three ghosts work together to manipulate the wife and husband leading them down a path to destruction involving the family friend. Inexplicably, rather than just gettin the hell out of that freak house, the couple decide to seek the assistance of a local odd Buddhist monk. But the monk's efforts were not enough to hold off the manipulative ghosts. All this manipulation from the three ghosts eventually leads to the awesome final scene.

This is absolutely a corny and humorous movie because of the 70s style, the goofy low tech translucent blue ghosts, and giant crabs, but it was also a very entertaining film even before the kick ass ending. One of the other positives of this film is that it included one or two good nude scenes along with the entertaining 70s aspects, a couple of good bloody sword scenes and the killer ending makes this a highly recommended movie to see.
Posted by owenandbenjamin at 6:09 PM 4 comments:

Below are some photos I took of a small Buddhist temple in a quiet neighborhood in Otawara, Tochigi-ken during my recent visit to Japan. I thought this temple was somewhat unique because of there were many small statues throughout the garden in front of the temple that I had not seen in some of the other temples I've visited.
I'm not sure who this person is. If anyone has an idea, please let me know. 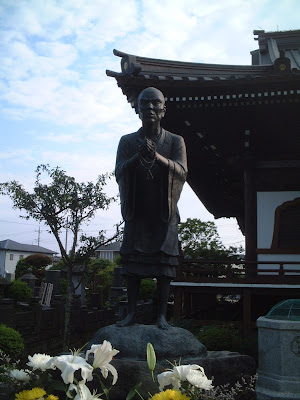 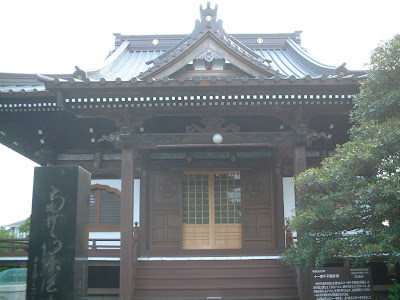 Although I am familiar with Buddhism, the figures in the statues below are not familiar to me. Anyone know who this deity is? I assume it is a Buddhist deity such as a Bodhisattva and it appears to be female but I am not certain. 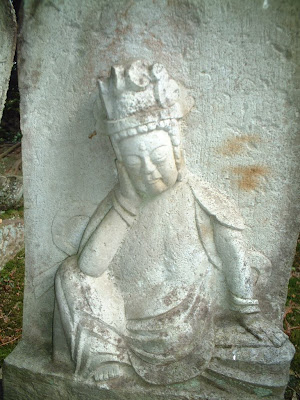 Either this is a three headed deity or three separate deities or figures standing close together. 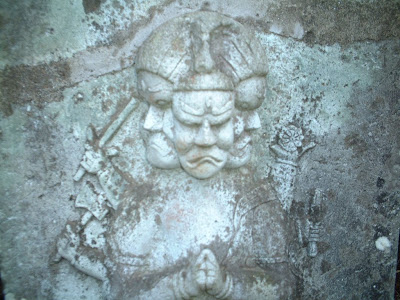 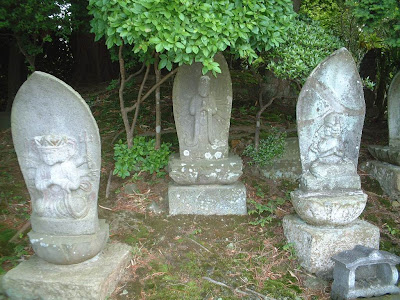 I would have taken more photos at this temple but I had my two boys with me and it was almost dinner time. I will try and take more photos here during my next visit probably in August.

Posted by owenandbenjamin at 3:05 PM 3 comments:

Email ThisBlogThis!Share to TwitterShare to FacebookShare to Pinterest
Labels: Buddha in my home, Buddhism, Kamakura, Temples and Shrines, Visiting Japan

Enoshima and Kamakura and me

Prior to visiting the Daibutsu and Tsurugaoka Hachiman-gu in Kamakura I visited the nearby island of Enoshima which is part of the city of Fujisawa. Benzaiten, the goddess of music and entertainment, is enshrined on the island. The island is the scene of the Enoshima Engi, a history of the shrines on Enoshima written by the Japanese Buddhist monk Kōkei in 1047 AD. Once again, I apologize for the small number of photos. I was carrying my 2 year-old and watching my 4 year-old at the time. I was sweating like crazy by the time I reached the top of those stairs while carrying my heavy bag of rice. :)
Leading up to the stair to the shrine was a narrow road full of tourists. Shops lined both sides of the very narrow road. Although the road seemed to be for strolling tourists, typical of Japan it was actually a regular road used by small vehicles and motor bikes. So I had to be extra careful watching after my two boys so they wouldn't step in front of a motorbike or mini-truck. 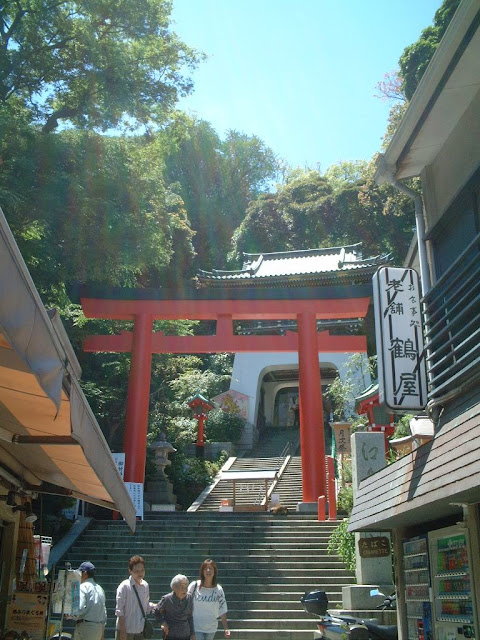 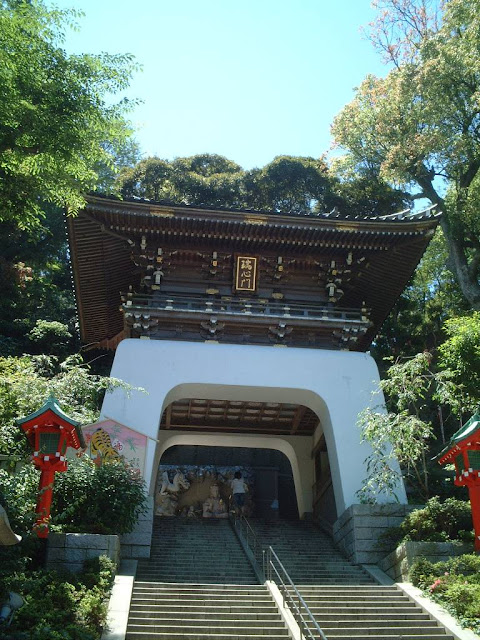 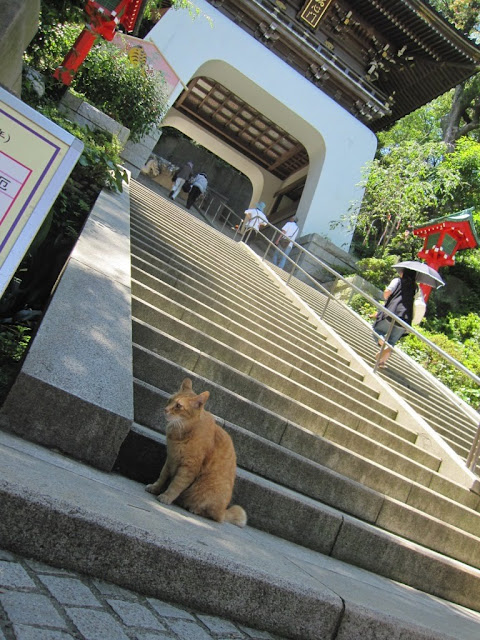 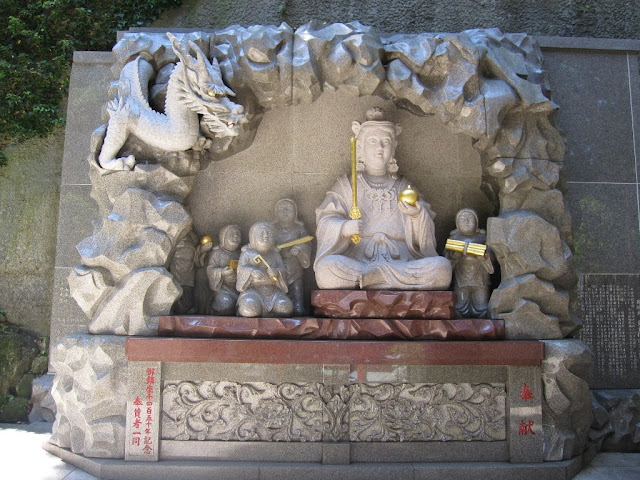 Ok, I normally don't like to post pictures of myself on the web but here I am in front of Daibutsu. Yes, the orange hat does not match the red shirt but oh well. 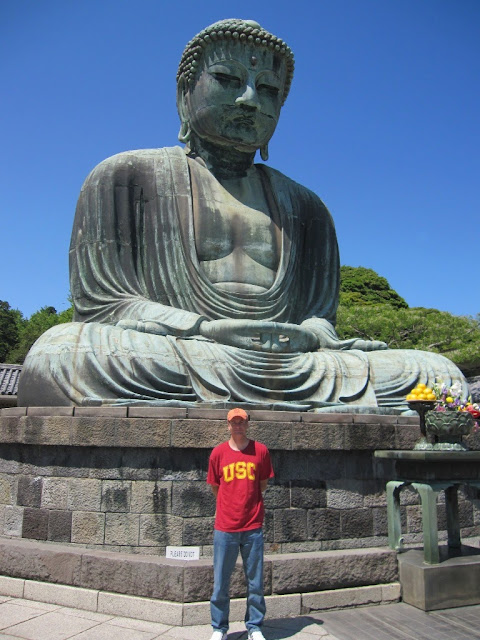 Here comes our train. This is at the station just down the street from Daibutsu. We had to battle ten thousand school kids to get to the station, get our tickets and get on the damn train. And the kids did not have any issue with pushing me out of the way to get on the train. But I didn't give ground. :) 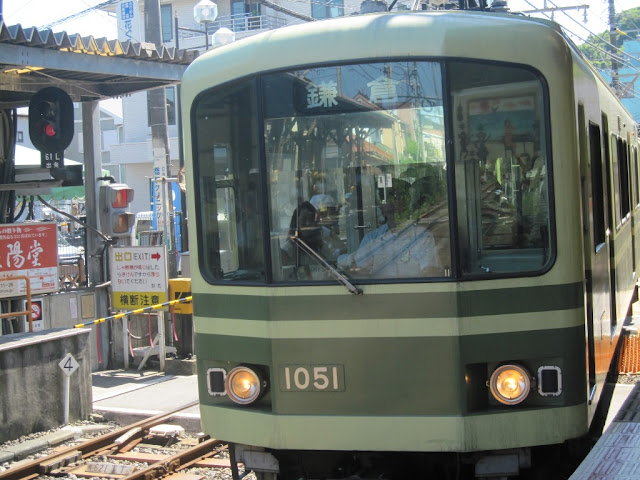 On the way home from Kamakura we stopped in Yokohama Chinatown and had some delicious Chinese food. Here is one of the small side streets in Chinatown. 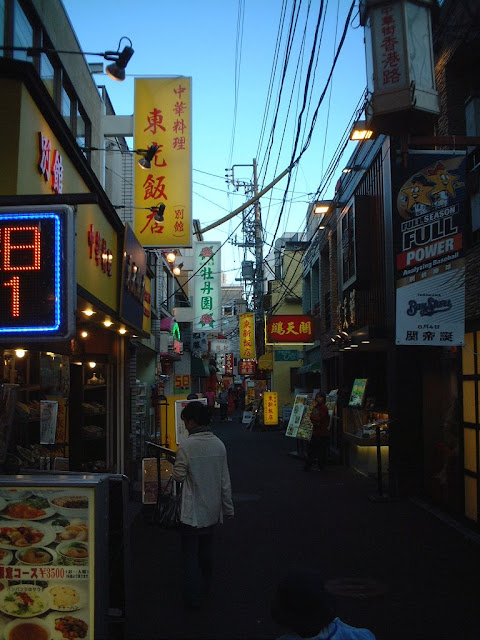 Posted by owenandbenjamin at 9:57 PM 10 comments:

Throughout Japan there are manhole covers with interesting designs or colorful pictures. During my recent Japan trip I came across these two in a quiet neighborhood in the small city of Otawara in Tochigi prefecture. I love that not only do they have these interesting pictures but they are in color as well. Pretty cool. 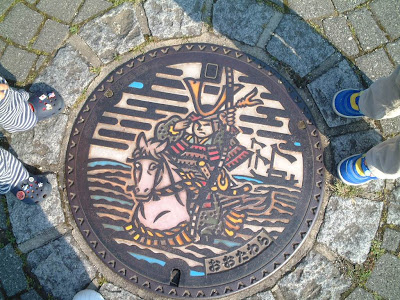 In the upper right corner of the fire truck cover is the symbol of the city of Otawara. Most or all cities in Japan have city emblems like this. This one and others remind me of mon, the emblems used to identify families or samurai clans such as the Tokugawa. 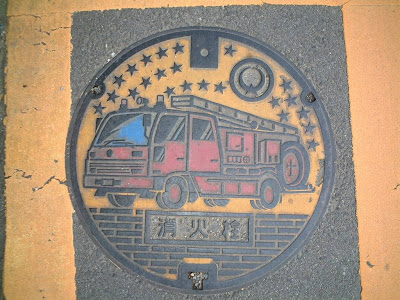 I just returned from Japan today and I am dead tired but I had a great time. One of the highlights was a day in Kamakura last Thursday. We lucked out because the weather was ecellent. We visited Enoshima, Daibutsu, andTsurugaoka Hachiman-gu. Below are some of the photos I took. I apologize for the quality of the photos. I am not a very good photographer but also it's not too easy taking photos when you are holding or chasing after a 2 year old.
Daibutsu was as amazing as I thought it would be. The meditative Daibutsu is a very moving figure and I could feel that when I stood at the base of the giant Buddha. One slight downside of the Daibutsu was that the area was swarming with literally thousands of school kids. THOUSANDS. It made it difficult to walk along the side walk, purchase train tickets, or enter the train while carrying a two year old. 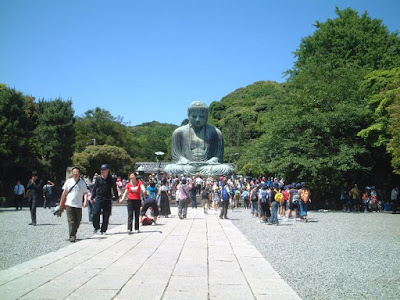 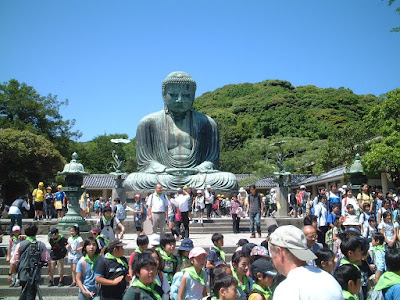 Below are a couple of photos from Hachiman-gu. I will post some more later but I wanted to post these two because of the new growths coming from the old stump from the famous gingko tree that fell earlier this year. See my March post of the story behind the famous tree and the sad demise of the old tree. But the good news is that new growths are sprouting from the old trunk as you can see below so there is hope that one day the tree will resurrect itself. 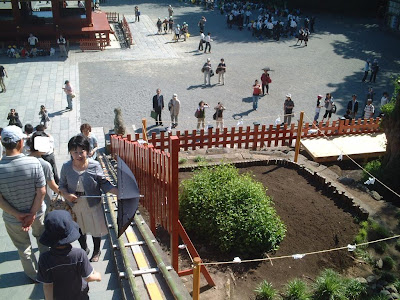 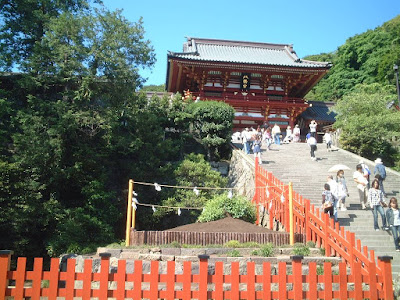 I will post some photos of Enoshima later.
Posted by owenandbenjamin at 6:33 PM 12 comments:

This is just a brief update of my current trip to Japan, my third in the last 6 months. When I return to the States I will post some photos.
On Sunday I went to Nikko with my family and visited some of ｍy wife's relatives. In Nikko we took our children to a local park with a playground. In spite of the cloudy and relatively cold weather, the park was crowded with children.
Today the weather was clear and warm and so we visited the Tochigi Prefectural Museum in Utsunomiya. This is an excellent museum surrounded by a beautiful park in the middle of the city of Utsunomiya in Tochigi prefecture. The museum has exhibits ranging from dinosaur bones to stuffed native Tochigi animals such as bears and foxes to giant beetles. There were also some very interesting exhibits of one of my favorite subjects, medieval Japanese history. These included painted screens of important figures such as Ashikaga Takauiji as well as other samurai era exhibits of armor, swords, and other historical artifacts. I could have spent much of the day there but with two small children we took the tour in approximately one hour, spending most of the time in the dino bone and giant beetles exhibits. :)
On Thursday weather permitting we plan to travel down to Kamakura which I have never visited before so I look forward to that.
Posted by owenandbenjamin at 6:43 AM 13 comments: