Here are some pictures from a previous trip to Japan. The quality is not the best because they are scans of photos.

On one of my earlier trips to Japan, I attended the 1000 Samurai Festival (Matsuri) at Nikko in Tochigi Prefecture, Japan. Every year Nikko has a festival celebrating a famous march of samurai called the 1000 Samurai Parade. Nikko is one of the most historic places in Japan. It is the location where the famous Tokugawa Ieyasu is interned. Tokugawa Ieyasu was the first Shogun to unify all of Japan after the battle of Sekigahara. This initiated the Tokugawa rule and the Edo period from 1603 to about 1868 I believe. Edo is the name for old Tokyo. The festival takes place at the Toshogu Shrines at Nikko.

The festival takes place in May. Here is a link to the Nikko Tourist Association page about the 1000 Samurai Festival.

And here is the link to the Nikko City website.

During the 1000 Samurai Festival, events are held such as Samurai on sprinting horses shooting arrows at targets and the famous 1000 Samurai Parade. The horsemanship was amazing as the riders would sprint at full speed with no hands on the horse. They would use both hands to shoot their arrows at the target as they flew by. It was quite amazing. There was a little bit of a light rain that day but it prevented any dust which was good. 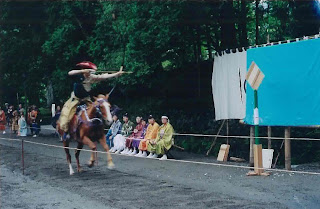 Here the Samurai are being led down the track to the starting gate. 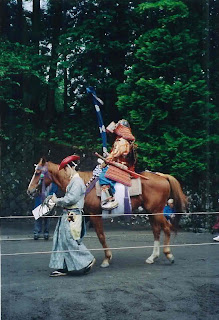 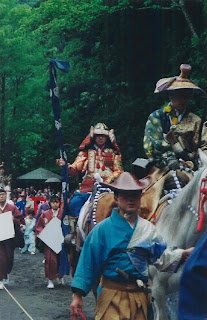 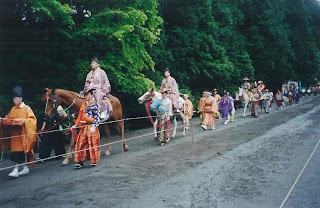 The parade was held the next day and thousands of towns people and tourists came to watch the parade. The parade consists of hundreds of the Nikko townspeople in costume such as Samurai as well as the carrying of a shrine. The parade heads down a small road and then turns left on another road. Because my grandfather-in-law is a longtime member of the town, he helps set up for the parade including the 15 foot tall parade announcers stand. I was allowed to watch the parade from this stand with my wife and the announcer as well as with another Japanese person who translated into English for the many foreign tourists. He did a very good job. I was a little embarassed though because when I first got up on the stand, I half-jokingly offered to announce in English. That was before I realized the gentleman spoke English so I hope I did not offend him by my comment. I am sure many people were wondering what the gaijin guy was doing up there since I got many looks, including from some of the parade members as witnessed by these next pictures. It is a little hard to see in the photos, but you can see some of the parade members looking up at me. 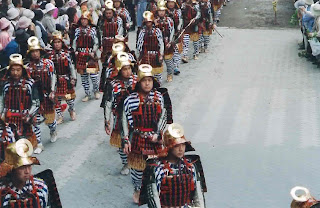 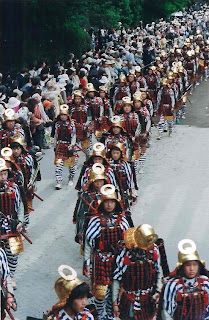 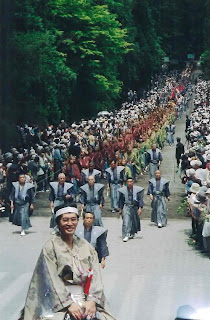 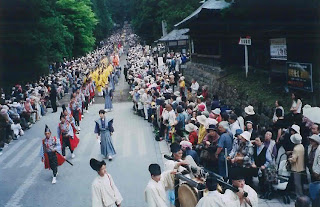 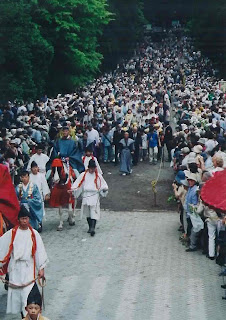 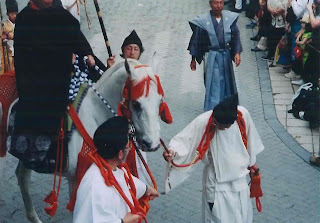 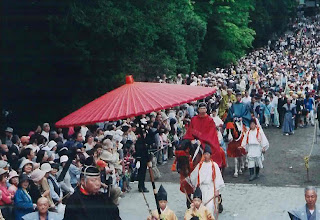 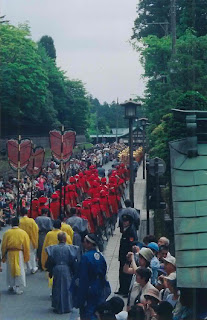 These next pictures show the parade members carrying the local shrine. The people watching the parade would toss coins to the shrine. The guys carrying it kept ducking or lowering their heads so they wouldn't get hit by the coins. The shrine is very heavy as you can tell by the many people straining to carry it. 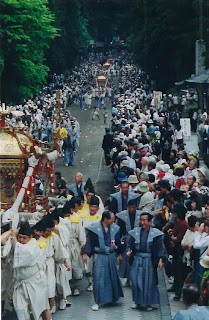 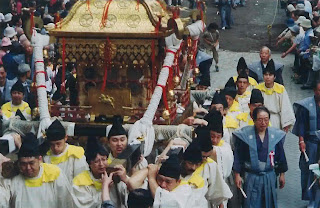 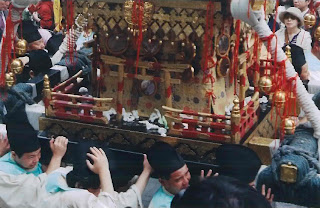 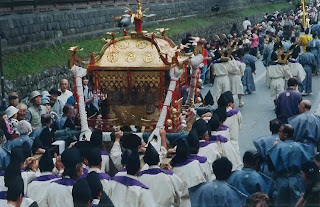 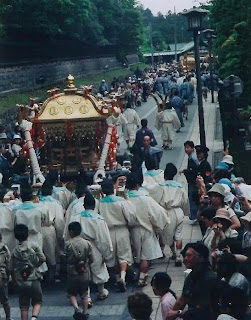 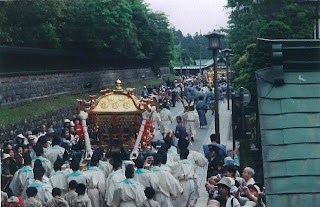 After the parade, we were walking back to our car and a group of school kids walked by. A couple of them said in English "Hello, how are you". Don't be surprised if you are in Japan and some school kids try and practice some English on you.
Posted by owenandbenjamin at 1:19 PM No comments: