A Geisha in Los Angeles

On Saturday, I met an actual, real live Geisha. How can I meet a real actual Geisha in Los Angeles you ask? A documentary film about today's Geisha of Kyoto was showing in Los Angeles and I went to see it. Kyoto Geisha are actually called Geiko.

Below is the website of the documentary film which was called Hanari Geisha Modern:

On the night that I attended, the Director, the Writer and an actual Geisha from the film were there to answer questions from the audience. The Geiko's name was Makoto and she was dressed in her kimono and painted white face. Makoto is from Kyoto. After the film she went to the lobby and people were able to take photos with her. I do not have any photos of myself with her because I did not think to bring my camera. I am so mad because I would love to have had a picture with her . Oh well.


Here is a picture of the Geiko Makoto from that night from another person's camera. She looks amazing. 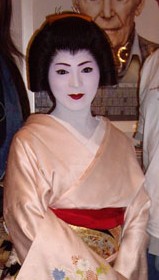 Here is a description of the documentary film from the website.

Hannari - Geisha Modern is a documentary film, which is truly unique in its approach. There have been numerous documentaries on the Geisha, which were limited to educating the audience through narration and interviews with scholars. Our approach is much more visual and aural, allowing the audience to take in the atmosphere through the images, the sounds of the instrument and the soft, melodic dialect spoken by the geisha.
The producer/director, Miyuki Sohara has trained alongside the geisha in Kyoto, working for several years to cultivate relationships within the geisha community. Her efforts have garnered this film crew a level of support no other film/TV crew has ever been granted.
Many of the popular films and stories about the Geisha tend to perpetuate the unwelcome notion that those who become geisha are victims of circumstance. Hannari - Geisha Modern shows the Geisha as dedicated artists and proud purveyors of Japanese tradition in their full glory.
For the first time in history, all Geisha districts in Kyoto were filmed.
Yuki, a geisha who married the nephew of J. P. Morgan 100 years ago.
Makoto pursues two careers as a Geisha and as a Jazz singer today.
The sprit of hospitality and the subdued beauty of the Geisha of Kyoto.Feel the beauty of the old and new Japan through the world of the Geisha.


Someday I will go to Kyoto and I hope I will be able to have my picture taken with another Geiko.


Here is a really good video of a Maiko performing a traditional dance.

Posted by owenandbenjamin at 8:36 AM 6 comments:

One of the places I like to walk to and around on my lunch breaks is Little Tokyo. It is about three or four blocks from my office and I walk past the LA City Hall to get there. 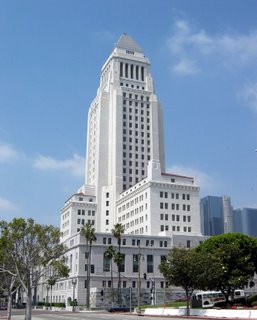 The main street of little Tokyo is First Street. It is mostly little restaurants that serve ramen or sushi or curry or bento boxes. I have eaten at several of them and they are pretty good. At night the street is well lit and there are usually many other people walking around so you can fell comfortable to be there at nighttime. Here is a picture of First Street: 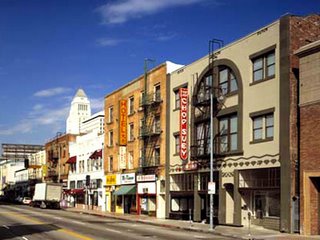 Right behind these buildings is a monument called the Go For Broke monument. During World War Two, many Japanese American men volunteered for the American military. They were put into their own units and they won more medals for bravery than any other American unit. The monument recognizes the bravery of the units and it was dedicated in 1999. Here are some pictures: 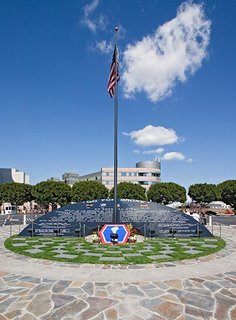 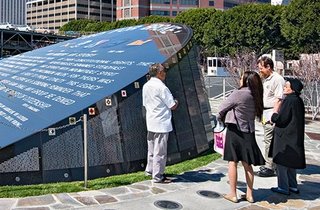 Next to the monument is the Japanese American National Museum. It is a combination new building and an old historic building. They have many exhibitions and shows but I have not yet been inside the museum. Here is a picture of the historic part of the museum which used to be part of an old Buddhist temple, the Nishi Hongwanjii Buddhist temple: 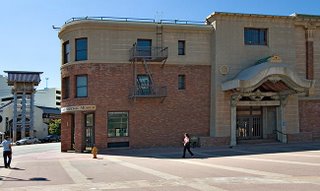 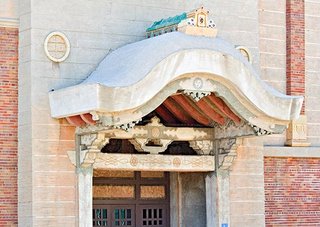 Across the street from the museum is an outdoor shopping center. It has many restaurants and gets very busy at lunch time. At the entrance to the shopping center is a replica of a fire lookout tower in old rural Japan. It is called a Yagura tower. 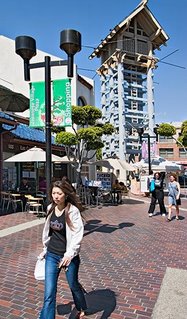 On the other side of the shopping center is a statue of a Japanese man, Sonotoko (Kinjiro) Ninomiya. There is also a town in Japan that is named after the man that came from humble beginnings yet pursued knowledge. The young Ninomiya—born into a poor family and orphaned at a young age—is reading a book even while working. In addition to lifting himself out of poverty with innovative agricultural methods he helped a number of feudal clans achieve financial health. Ninomiya also developed the idea that benefits received should be repaid—Hotoku or to repay virtue. 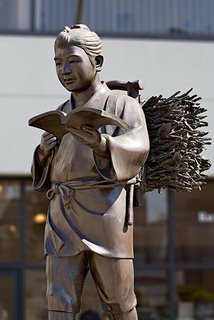 During the 1990's, Little Tokyo was really having a hard time. After the Japanese economy went down, there were not very many Japanese tourists coming to Little Tokyo like there used to be and business was very slow. Today, like in the other parts of Downtown Los Angeles, there are many new condo and apartment building developments in and around Little Tokyo. This has brought many more people and business to Little Tokyo, especially at night. Here is picture of another shopping area in Little Tokyo at night: 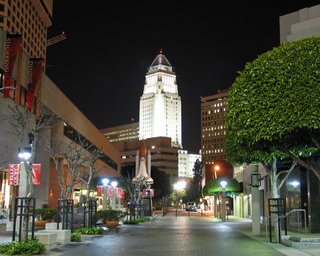 Posted by owenandbenjamin at 7:47 AM 5 comments:

Email ThisBlogThis!Share to TwitterShare to FacebookShare to Pinterest
Labels: Japan in the USA, Me, Temples and Shrines

I will be arriving for the 49th day memorial service where I believe the Urn will be placed in the family cemetary. This will be done in Nikko.


Below is a picture from my last trip. I am holding Owen. 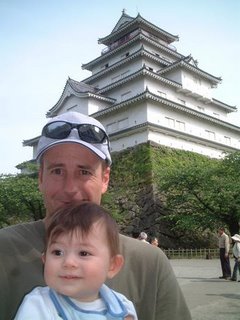 Posted by owenandbenjamin at 7:49 AM 2 comments: